I remember the first time I competed against someone and won.  My older sister – by 18 months – was learning her multiplication facts.  I was two years behind her in school, but wanted to do whatever she was doing.  My dad was in our room holding the flash cards.  3 x 4?  12!!!  I would respond with the right answer before she did.  I can see my dad’s amused face and smile of pride when he looked at me.  Her look of frustration and wanting me out of there.  (I obviously have compassion for her now.)  I was the middle of seven children and there was one way to get attention – through winning.  And that was the moment it clicked for me: I decided that as long as I could compete with others (and win), I might get the attention I craved.

So that moment played on repeat for years.  There was no “friendly” competition because if we didn’t win or excel there was no acknowledgment.  I had to win or I was invisible.  This wasn’t done on purpose – there just wasn’t time with nine people in the same house (with one shower mind you).  I kept competing with my siblings.  Who cleaned up the living room the fastest?  Who could stay quiet the longest in our 9 passenger van on the four hour drive to grandma’s house?  I competed with my friends over stupid things.  I was the first person done with every test at school.  (It wasn’t even a contest and I made it one!  I know all the planets quicker than everyone else – eat that!)  I would compete with other runners on the track and cross country team.  I would compete with other sales people at my previous companies.  I would make up a story in my mind that made my competition “bad” so I had a chip and motivation to win.  My siblings all did the same.  And it’s caused us all to be successful.  But the downside is that we compare ourselves to everyone else. Family get-togethers are a non-stop “look at me” and there aren’t usually questions about how you are doing.  If you don’t speak up, you aren’t recognized.  Or worse, there is no acknowledgment of another person’s success because it apparently makes others look bad.  And I know we aren’t the only family like this out there.  I was just listening to Timothy Shriver (of the Kennedy family) on Oprah’s Super Soul podcast and they would compete over who would eat dinner the fastest.  I can only imagine the level of success in that family – competing against presidents and celebrities. 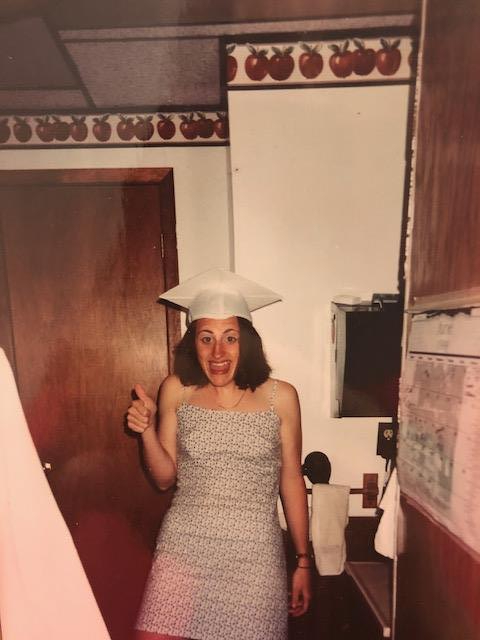 (Me on high school graduation night.  Maybe I should have competed against women with good hair that were cool.  That would have improved my sexy image.)

So it becomes a conundrum.   How do we change the internal makeup and motivation to be accepted?  How do we become competitive without comparing?   Because comparing is detrimental to everyone involved.  Is it even possible?!  Society has conditioned us to do this; “Buy this car so you look better than your neighbor.”  Or, “Go on a diet so you’re as thin as she is.”  When someone tells me they are competitive I immediately think of how they compare themselves to others.  We don’t usually compare ourselves to people worse than us.  We don’t need to because we subconsciously already know we’re better and don’t pay them any attention.  We compare to the “perfect” and “successful” people on social media who we think are better than us.  And it’s so debilitating.

The other side of this conundrum is that surrounding ourselves with people better than us makes us better in the long run.  You are the average of the five closest people to you.  Because you will compare yourself to them and it’s proven you will slowly rise and fall with the company you keep.  I’ve always wanted to be “better” and am so conscious of who I’m spending time with.  It works out great in the competition of life, but makes for some moments of inadequacy along the way.

I’ve been given the advice to compete with myself.  This is hard for me, but I try.  Because feeling envious when someone else wins isn’t motivating anymore.  It’s become a burden.  “Blowing out someone else’s candle doesn’t make your’s burn brighter.”  Yep, got it.  And it’s taking a lot of ego and self-improvement work to compete against my own version of success.   It takes years to uncondition our minds what we were taught, or what we thought we were being taught.  We need to surround ourselves with people that are better than we are because we rise to that level.  But we also have to make sure that we don’t feel insecure or inferior.

I’ll find myself not even attempting to do something unless I’ll be good at it or have a chance to win.  Are you like that too?  Do you doubt yourself before you start and compare what you think your efforts and results will be in comparison of others?  “I’m not as pretty as her so I’m not even going to try….I don’t have the experience he does and have no chance of getting the promotion…”  I think this is why I’m so into cheering on other women in obtaining their goals – it’s almost like I’m undoing years of jealousy and comparison.

So my goal that I hope you keep in mind is that we don’t need to win anything to be worthy.  God has made us worthy amid all our losses.  There is no record keeper tracking our weight, our income, our home, or how successful our children are.  We all win and lose.  Everyone wins in some areas and loses or has a hard time in others.  Our job is to surround ourselves with people who don’t make us earn it.  They accept us where we are and love and acknowledge us when we fail.  We can still be competitive and successful without tying our worthiness to the result.  Because the real competition should be who has the best support group.

Published by Rise With Rebecca Blog

I have been a coach, recruiter, and saleswoman for 20 years. Author of the best-selling book, "Beyond the Board: How to Achieve Your Vision Board Goals in a Fulfilling and Sustainable Way." I built a multi-million dollar supplemental insurance business in nine years with Globe Life, Family Heritage Division, and retired at age 33 when my future renewals reached $1 Million. In 2018, I launched my own consulting company, Rise Up Consulting, LLC. We focus on emerging sales leaders as they transition from the Leaderboard to Leadership™. It's my mission to change the status quo around developing sales leaders so they find wins early and often (instead of the old "learn as you go" approach.) We offer corporate and group programs, and speaking opportunities. I live in Maple Grove, MN. (Main photo by Angela Divine Photography.) View all posts by Rise With Rebecca Blog