I was recently attacked on social media by a girl I hardly know.  She had tagged me in a random post about how she didn’t like that her friends promoted businesses on social media.  (Let’s not get into the fact that she’s constantly posting boob pics to promote her “fitness” business. Also insert eye roll here.)  I quickly untagged myself and de-friended her.  And my ego was plotting a defense attack.  But I didn’t do what “old Becky” would have done. I didn’t message her to ask what her deal was.  I didn’t jump into the conversation and add fuel to the fire.  I simply just moved on.  I did however, in a perfect Minnesota-nice-passive-aggressive way, post a Brene’ Brown quote from her book “Daring Greatly”.  And it’s the following: 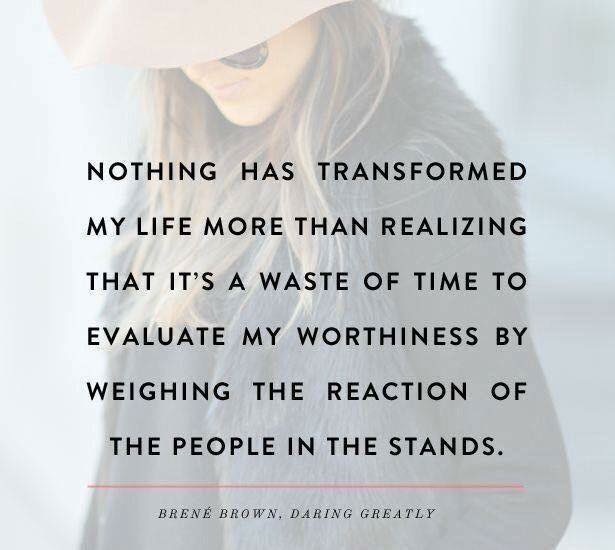 And I really did feel like the above quote.  I didn’t really think about it for much longer after that.  I then put a hold on that same “Daring Greatly” book and finally finished it yesterday.  I won’t give you a book report, but several things struck me when she spoke about vulnerability, and how letting it all hang out and putting ourselves out there is so beneficial professionally and personally.  And being vulnerable, even when we know there will be people out there ready to pounce on you for doing something they are not willing to do themselves.

We can’t do anything great without feeling vulnerable.  Going on that first date with someone new and wondering if they will like you.  Starting a new business venture hoping it won’t fail.   Shoot, I thought about starting a blog for six months before I got the courage to publish my first post.  It sounds so clique’ but nothing good happens inside of our comfort zone.  And vulnerability is waiting for us outside of it.

The two areas I wanted to share about specifically are the two areas that mean the most to me: as a parent and an entrepreneur. As a parent, Brene’ writes, “Who we are and how we engage with the world are much stronger predictors of how our children will do than what we know about parenting….’Are you the adult that you want your child to grow up to be?'” Are you a jerk to people on social media?  Are you an honest person?  Do you judge other parents because they make different choices than you?  (Guilty of this sometimes, not gunna lie.)  What she says is that people who judge others because they have doubts about their own choices.  We need to open up to our vulnerability to get to wholeheartedness.  When we are in that space, there is no need for judgement or worrying about what people think.  We don’t need to compete with other parents about who’s child is a better athlete.  Or who is smarter.  Or who is no longer peeing the bed.  And our children will see us acting this way and emulate our actions.  And this is what matters in the long run – what kind of people they are.

The second area I resonated with was how vulnerability helps us in business – specifically for entrepreneurs.  Brene’ interviewed Gay Gaddis, a business owner and one of Inc. magazine’s Top 10 Entrepreneurs of the Year.  She said that “When you shut down vulnerability, you shut down opportunity…By definition, entrepreneurship is vulnerable.  It’s all about the ability to handle and manage uncertainty.”  I’ve been self-employed since 2000, and I put myself out there a lot.  Sometimes it’s in a simple social media post.  Good lord, how will people judge this one?!?!  Sometimes it’s having a conversation with a new prospect.  Are they going to take my call?  And sometimes it’s letting my team members know that yes, I’ve experienced some major defeats, but that the sting only hurts for a little while.  And then over time we learn that feeling weird and awkward is actually just a normal part of the job.  And then we change, and our relationships change, and then our businesses change.

So do something this week that your children will be proud to see you do.  Do something vulnerable in business that will impact the long-term vision of your company.  Otherwise you’re just someone sitting in the audience waiting to write your critique.  And people really aren’t too interested in those opinions anymore.

Published by Rise With Rebecca Blog

I have been a coach, recruiter, and saleswoman for 20 years. I share my tumultuous journey in the best-selling book, "Beyond the Board: How to Achieve Your Vision Board Goals in a Fulfilling and Sustainable Way." My sales and management career began in college selling books door-to-door for the Southwestern Company. I then built a multi-million dollar supplemental insurance business in nine years with Globe Life, Family Heritage Division, and retired at age 33 when my future renewals reached $1 Million. I co-founded Support Her Endeavors networking group for women in January 2018. In 2018, I launched my own business and sales consulting company, Rise Up Consulting, LLC. I can relate to being on top of your game and also the burnout that happens when energy isn't properly managed. I’m a wife, friend, mentor, and connector for men and women to find solutions to feel and be their best. I live in Maple Grove, MN. (Main photo by Angela Divine Photography.) View all posts by Rise With Rebecca Blog

2 thoughts on “Let it all Hang Out”